People often ask me how I’ve become so confident and it’s always really hard for me to answer that question. I think, mostly because I question myself a lot in the choices I’ve made and if I’m good enough. That’s not necessarily in regard to my appearance, but to my life. That’s a natural and normal response to getting older, but I always laugh a little bit at the question. Aside from the obvious response of “fake it till’ you make it”; I think there is a key reason I’ve managed to accept myself enough to live in a brighter world than I did when I was thirteen. The simple answer is that I’ve always managed to surround myself with magical people.

I’m constantly amazed at the individuals willing to jump to my defense in an instant. Have I heard negativity, in regard to my size, during my lifetime? Of course. Would I say it’s a lot less than the average person growing up in my generation? Absolutely. I have to own my past and how it differs from many people I know. I think that’s only fair if I’m going to sit here and preach self-love. In fact, I’d go as far as to say the most hatred I’ve ever dealt with has been in the last two years of my life, but it touched me a lot differently. It’s been difficult, because I felt thrown into a place that I should have learned to cope with in adolescence, but instead it’s been impacting my adulthood.

That’s a story for another day. I say all this to recognize the friendships/relationships I created in my youth that saved me from a life filled with ridicule and hatred. I certainly did enough of that myself; I didn’t need any help from others.

It’s safe to say I’ve lost a lot of friends.

Some, just because it’s life and it happens.

Others, because there were fights that never healed over time.

Many I’m just not able to see as much as I’d like.

Most of who inspire me from their own confidence.

The one thing I can say, no matter how it happened, every single one of those people had my back. They each still hold a very important place in my heart, because you don’t make special memories with just anyone. They supported me and helped me feel beautiful. Above all I’m sure they kept things to themselves that could have destroyed me. While I’m not a fan of secrets, sometimes it’s important to know when a piece of information will help heal someone or continue to keep them down. I’m not a fool. I know when people talk about me and whether or not it’s malicious. I also know when my friends, past or current, are trying to keep my soul from the dark stuff. I appreciate that dearly, because it played a huge role in the person I am today.

I cannot emphasize this piece of advice enough: SURROUND YOURSELF WITH MAGIC.

It’s not hard to find and I seem to discover it around every corner. It’s in people you never thought possible and in quiet hero’s who surprise you in times of need. My social media is mostly filled with positivity. That is not an accident. It’s important that you accept the role you play in your own happiness. Most of the power is in your hands and for the rest you’re just along for the ride.

I do want to end on this note. I mentioned, ”fake it till’ you make it” earlier. That could not ring more true for me. There should always be a key element of self-satisfaction in your being, but few question the confident girl. However, they do demand answers from the one who looks like she’s questioning herself. Just keep that in mind in your every day life. Take a risk. Nine times out of ten people will applaud you for it and if they don’t at least you we’re bold enough to try. That should be plenty to sleep at night. 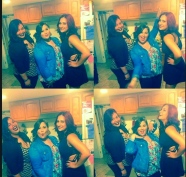